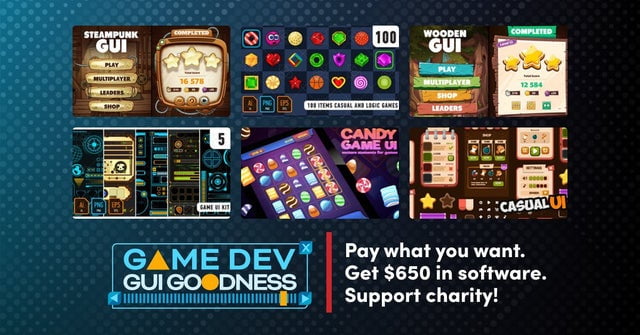 The Game Dev GUI Goodness Bundle is here to help you bring your indie game ideas to life! This insanely large collection of art and assets will help you shape up and design your very own game. From this deal you can get from icons, buttons and animations, to all sorts of user interface elements and more! Moreover, keep in mind that you will end up saving tons of money by choosing this method of purchase instead of the individual items, as the estimated retail value of these assets exceeds €600. So what are you still waiting for? This deal is an absolute must have!

Make sure you lock in this amazing bundle before the time runs out!

Getting your indie game going was never easier!

In case you were on the hunt for some assets to ease your game development process, you can now kick back and relax, as the search is over. The Game Dev GUI Goodness Bundle is a paradise for any indie game creator! Get you a small team, or rely solely on yourself, and get working on your project with the help of this amazing software bundle! You will be looking at 3 individually priced tiers which contain a grand total of 69 items that you can unlock and use whenever you need. Therefore, the decision on how much you will end up spending is ultimately yours, no need to worry about overpaying!

We have a long way ahead, so let’s get the contents going! In order to unlock the first 9 items of this deal, you need to spend the bare minimum amount of €1! You will receive:

You can get even more amazing stuff from the second tier! All you need to do is pay more than the average cost – at the time of writing – of €18.45 and you will get yourself 15 more items, as follows:

Last but definitely not least, don’t pass up on the chance to grab the complete collection included in the Game Dev GUI Goodness Bundle! Upon paying at least €22.16 you will unlock all previously enlisted contents, plus 45 more amazing items! Make sure you also check out the following:

Lock in tons of amazing assets and UI art from the Game Dev UI Goodness Bundle!

When was the last time you freshened up your toolbox? With the Game Dev UI Goodness Bundle you can now update and upgrade your creative toolkit! The amount of contents you can unlock from this deal is absolutely massive, and as we previously mentioned, the best part is that you will be saving up lots of money while doing so. Become the ultimate indie game developer and get working on your project with the help of the assets included in this incredible software deal! So go ahead and check out the Game Dev UI Goodness Bundle and other amazing deals, only at Humble Bundle.

Along with getting tons of art and assets for your projects, you will also be performing a humanitarian act! That is possible as Humble Bundle has partnered up with thousands of charities that they support with each purchase from their platform. Upon purchasing this bundle, you will be aiding the HFC and Michael J. Fox Foundation for Parkinson’s Research charities!

Perform an act of kindness by supporting charity while getting your new collection of items!