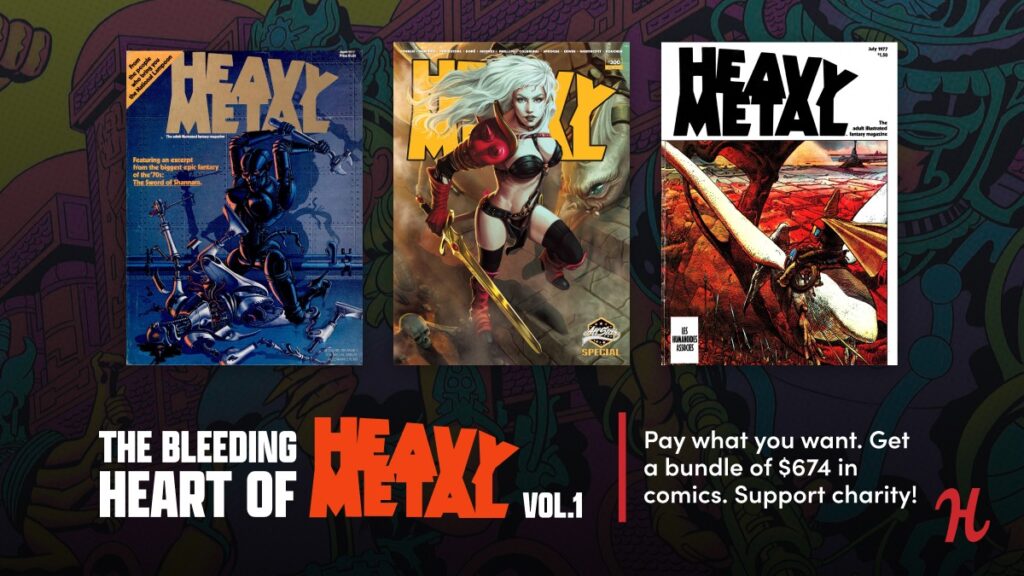 Been on the hunt for some good reads lately? Well, you’re in luck, as The Bleeding Heart of Heavy Metal, Vol. 1 bundle has arrived at Humble Bundle! Brace yourself for an insanely large collection of comic books to keep you entertained anytime and anywhere. There’s just no way that you could get bored with these titles, as there’s so much to unravel. You will take a leap between different worlds, characters, and storylines that are spreading over the span of 45 years! This is considered to be the “World’s Greatest Illustrated Magazine”, so you know you’re definitely in for a treat when skimming through this collection.

Don’t wait any longer and lock in this deal while it is still available!

Prepare for a rather historical journey across many years of illustrated art! The Bleeding Heart of Heavy Metal, Vol. 1 bundle keeps its numerical consistency, as for this anniversary deal, you will be looking at no more and no less than 45 items! Especially given the praise that this magazine has received over the years, you know this will be a good one. You will get yourself the perfect mixture of science-fiction, horror and fantasy from this incredible comic book deal! Of course, you will ultimately decide how much to spend for the stuff that you want, as there are 4 individually priced tiers waiting for you to uncover their adventures.

Without further ado, let’s get the first tier and its contents going. Kick off the collection with these 3 titles that will be yours for the mere cost of €1. You will receive:

It would be such a shame to pass on the second tier, especially since this one will add 9 more items to your set! All you need to do is raise the bar to €10.28 or more and you will also unlock the following:

Keep adding more and more value to your comic book library! The third tier will be yours upon paying at least €18.51 and it includes 13 more contents, as follows:

Seize this incredible opportunity and lock in the full The Bleeding Heart of Heavy Metal, Vol. 1 bundle comic book collection! Therefore, if you decide to go all out and spend €25.71 or more for this deal, you will receive all previously enlisted contents, plus 20 additional titles! Make sure you don’t miss out on:

Step up your comic book collection with the The Bleeding Heart of Heavy Metal, Vol. 1 bundle!

Look at the large amount of items that you can lock in for such a good price! This outstanding comic book deal is as good as one gets, since by purchasing The Bleeding Heart of Heavy Metal, Vol. 1 bundle you will end up saving well over €600 of their total retail value, regardless from the tier that you end up deciding on! You definitely wouldn’t want to pass up on this one, especially since it is indeed considered to be the “World’s Greatest Illustrated Magazine”. It’s about time you find out why! So go ahead and check out The Bleeding Heart of Heavy Metal, Vol. 1 bundle and other amazing deals, only at Humble Bundle.

To make things even better, you will be able to bring your contribution to charity while locking in all those amazing titles! That is possible as Humble Bundle has partnered up with thousands of charities that they support with each purchase from their platform. Upon purchasing this bundle, you will be aiding the Comic Book Legal Defense Fund charity.

Bring your altruistic side to the forefront and lock in some amazing comics at the same time!