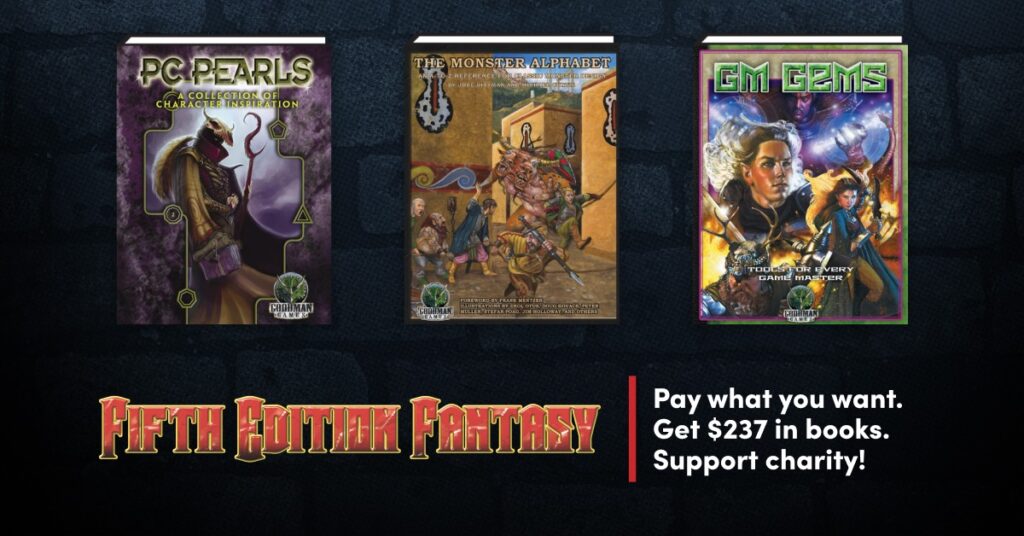 Are you ready for your next RPG adventure? the Fifth Edition Fantasy by Goodman Games Bundle is here to deliver you a collection to enjoy for your future tabletop gaming sessions! You will be very happy to learn that this deal includes all 18 Fifth Edition Fantasy adventures for different party levels. So you already can tell that you’re getting yourself yet another staggering deal! It’s time to put your critical thinking, strategy, bravery and wisdom up to the ultimate test. So gather all your companions around and get embarking on some quest in these fantasy realms!

Make sure you don’t miss out on this deal, as it is only available for a limited time!

Step up your RPG book collection with this set of 5E role-playing treasures!

It’s time for some new adventures with some incredible RPG books! The Fifth Edition Fantasy by Goodman Games Bundle brings you what your usual Goodman Games Bundle does, which is a set of awesome role-playing adventures for you and your friends to embark on. This is the time where you have to test your abilities, and you will get to enhance your skills when it comes to running games, creating characters or creating monsters for your very own campaigns! These 3 individually priced tiers will be more than just a new tabletop journey, so make sure you choose wisely and not miss out on anything.

We should probably skip to the questing as of now! The first tier includes 3 items that can be yours for the insanely low cost of just €1! You will receive:

There’s a lot more for you to unpack, so keep going! Increase your investment to at least €8.79 in order to also lock in the following 8 titles:

Finally, make sure you don’t miss out on the final contents of the Fifth Edition Fantasy by Goodman Games Bundle! If you decide to spend €15.83 or more for this deal, you will unlock all previously enlisted contents, plus the next 11 titles, as follows:

Hop into fantasy worlds with the Fifth Edition Fantasy by Goodman Games Bundle!

Your RPG gaming sessions are about to get better with this amazing book collection! The Fifth Edition Fantasy by Goodman Games Bundle is an absolute treasure for any role-play gaming fan. Especially since you have some titles in there that will help you develop your own adventures with all the required details, from the beginning to the epic ending! Not to mention that you’re getting a staggering deal thanks to which you’ll be saving loads of money! So go ahead and check out the Fifth Edition Fantasy by Goodman Games Bundle and other amazing deals, only at Humble Bundle.

As per usual, while getting yourself yet another epic collection of RPG books, you will get to play the hero by coming in support of charity! That is possible as Humble Bundle has partnered up with thousands of charities that they support with each purchase from their platform. Upon purchasing this bundle, you will be aiding The Global FoodBanking Network (GFN) charity!

Bring your contribution to charity and lock in an amazing set of books!