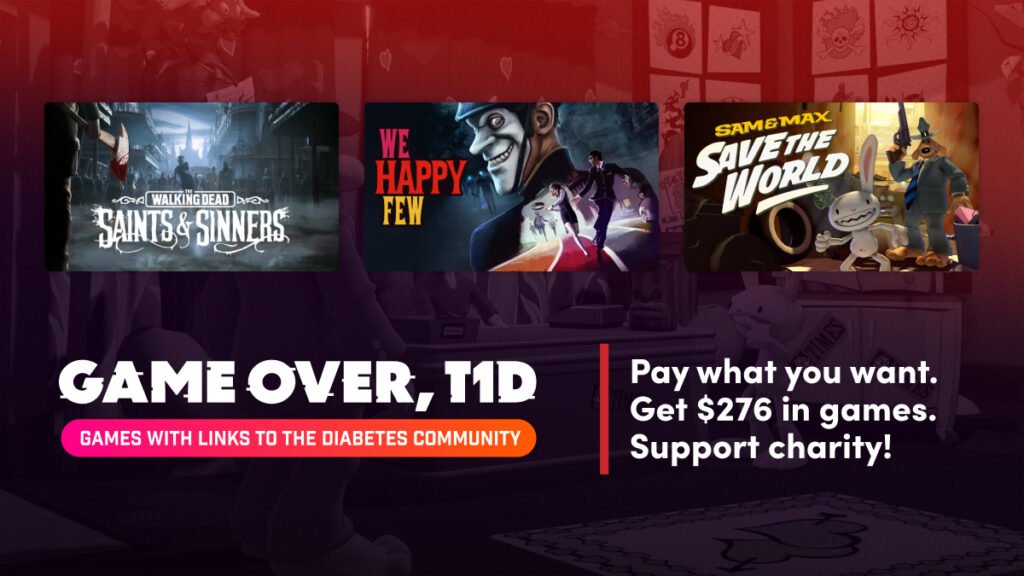 It’s time to stand up and fight against type 1 diabetes! The Game Over T1D Bundle has as its main focus point the fight against this horrible autoimmune disease that unfortunately affects millions of people around the globe! Now you can be a hero, not only in games and the virtual world, but by standing up for this cause by investing in this bundle. You get two accomplishments in one, as you will be locking in an amazing set of games to keep you entertained, all while supporting a worthwhile cause and fighting to help cure type 1 diabetes!

Make sure you don’t miss out on this limited time deal!

Help improve the lives of people living with T1D!

All efforts are needed for this one, so stay put and support the fight against type 1 diabetes! With the Game Over T1D Bundle, you will get lots of amazing games for an outstanding price, all while supporting a very important cause. The even more intriguing part is that all of the titles are somehow related to the diabetes community, as they either feature characters or themes that are directly related to T1D, or the developers are directly impacted by this disease. Moreover, as this is no ordinary deal, you only have to pay for one tier to own them all!

Therefore, without further ado, let’s get the fun started! All you need to do is spend €11.08 or more for the Game Over T1D Bundle and you will lock in all 12 awesome titles! As per the system compatibilities, all of them are Windows compatible, while 4 are also playable on Mac OS, 3 on Linux, and one of them requires VR support. Don’t pass up on the chance to grab all these amazing titles, as follows:

Stand in solidarity and get awesome games with the Game Over T1D Bundle!

It’s not often that you can get such an amazing collection of games for such a good price, all of it while also supporting an incredibly important cause such as this one. Well, with the Game Over T1D Bundle, you can get both of them, as you will be a direct supporter of the fight against type 1 diabetes! This autoimmune disease is affecting millions and millions of people around the globe, and improving their life is an absolute must during their fight! So go ahead, stand up, fight and check out the Game Over T1D Bundle and other amazing deals, only at Humble Bundle.

Of course, as this deal revolves around supporting a charitable cause, it is only natural that your purchase will be both an investment in amazing games, and an act of charity. That is possible as Humble Bundle has partnered up with thousands of charities that they support with each purchase from their platform. Upon purchasing this bundle, you will be aiding the JDRF charity, whose activity is directed towards improving the lives of people living with type 1 diabetes.

Show support towards a worthwhile cause while adding some amazing games to your library!